As you know, I’m a huge fan of any brewery who gives credit to the artist on the label. Any company large or small can go out and hire designers and illustrators. When the artist is credited, it’s an expression of partnership that goes beyond the “hired gun” relationship. It says, “We chose this talented person to create this image to represent the contents of this bottle” and I think that’s cool.

Yannick Brosseau creates the art for Montréal’s Brasserie Dieu Du Ciel labels. His email address is right there on every label. He was kind enough to reply to me regarding the artwork and some insight into his process.

“My work is inspired by various mythologies and by some american artists associated to Pop Surrealism like Mark Ryden, Audrey Kawasaki ou Nicoletta Ceccoli-Marieke only to name a few… Each label for Dieu du Ciel! represent a divinity from an imaginary pantheon.” Appropriate for a brewery named “God In Heaven”, non?

Each little “beer god” on Dieu Du Ciel labels seems to be finding their place in the modern world. Nature is always well represented in their portraits, ancient as beer itself. There’s a story being told by each and perhaps by drinking the beer, you might be able to hear it.

“I begin from the title of the beer that is given by Dieu du Ciel to elaborate the concept. Sometimes, people at Dieu du Ciel have precise request, like in the the case of the beer La Pénombre, it is an hommage to Greg Noonan, a brewer, but most of the time, I have full liberty.” 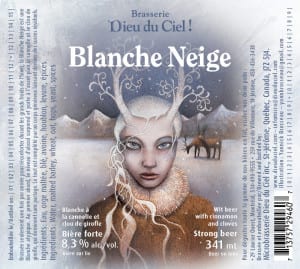 My favorite of the Dieu Du Ciel labels is Blanche Neige (even though I’m so tired of snow). I may love a squirrel on a label, but horned forest beasts take the cake! And I adore how the antlers form from her forehead. Wish I could find that because a Wit with cinnamon and cloves sounds amazing.