Have you ever wondered what it’s like to attend 3 Floyds Dark Lord Day in picturesque Munster, IN? Or any major beer festival for that matter? If you don’t live in the Chicago vicinity, it can seem like a magical wonderland where your wildest beer dreams come true!

The truth of the matter is, IT IS!

I’ve never been to a bigger beer event. Tasting and bottle sharing are heartily encouraged. People are super friendly and really come together around their love of beer.

Josh and I attended a couple of years ago and it was miserable – 40-degree temps and rainy. Warming up with high-ABV stouts just made you sloppy on top of that. Were bands playing at that particular beerfest? Probably. I wasn’t standing out in those conditions to find out. I swore that I’d never go back, but here we are, getting ready to attend!

I emailed Josh and our pal Jimmy from Milwaukee to straighten out plans for our day. The weather forecast for Saturday looks bleak – low 60s and rain. Looks like another rain poncho beer festival.

Josh and I are in Group C which means we can pick up our allotment from 1:00-3:00 PM. Did I mention how you get your beer? When you buy your tickets, you are assigned a group number like when boarding a plane. You have a two-hour window to get in line and claim your spoils.

Inside the brewery, you will be handed a commemorative tote bag containing:
Four bottles of 2017 Dark Lord Imperial Stout
One bottle of a 2017 Dark Lord barrel-aged variant OR two bottles of vintage Dark Lord (2014, 2015, or 2016)
The tote bags will be pre-packed, and the variant/vintage bottles you receive will be at random.

A message from Josh

The most important piece of advice going into an all-day beerfest is “be prepared or be boring”. I know full well that I don’t have the personality to be responsible and stay sober throughout, so I make sure that I have a cache of cash stashed outside my wallet for cabs (if my phone dies), for sobering-up food, or to throw in the face of potential attackers as a diversionary tactic.

Also, you should ALWAYS have a messenger bag or backpack to transport your bottles and stocked with the following: Hoodie, Rain Pancho, Flash Charger, a Hand-Towel, a Travel Pack of Kleenex (read: Toilet Paper), and some basic status-heals – Asprin, Allergy Pills, Alka-Seltzer, and Imodium AD – I’ve been at an all-day music fest where I really needed that last one and didn’t have it. I don’t want to talk about it.

That’s my advice, which I will likely totally ignore and get spend my day shivering in the port-a-john trying to get my phone to turn back on.

My Adv3nture Hoodies (or as I like to call it, “Drinking Jacket 2.0”) arrived today!

This was a Kickstarter, founded by Zane Lamprey, that I have supported twice – the original Drinking Jacket and now “the hoodie created to enhance your life”, the Adv3nture Hoodie.

Among the many sweet features of the hoodies, there are a few that are specifically useful to the drinker (and beerfest attendee): bottle opener zippers, neoprene-lined koozie pocket and built-in (and foldable) drinking mitts! As you might imagine, these will all come in handy for our Beerventure (or “Beerv3nture”).

I also ordered a backpack with a rain cover from Amazon which should arrive on Thursday. I don’t want my goodies to get wet and/or dropped. One of the things you see a lot of on the Dark Lord grounds is broken bottles. A LOT OF THEM were full when they hit the ground.

I’ll also be packing a power brick to charge my phone, so anything to keep stuff out of my pockets as well. 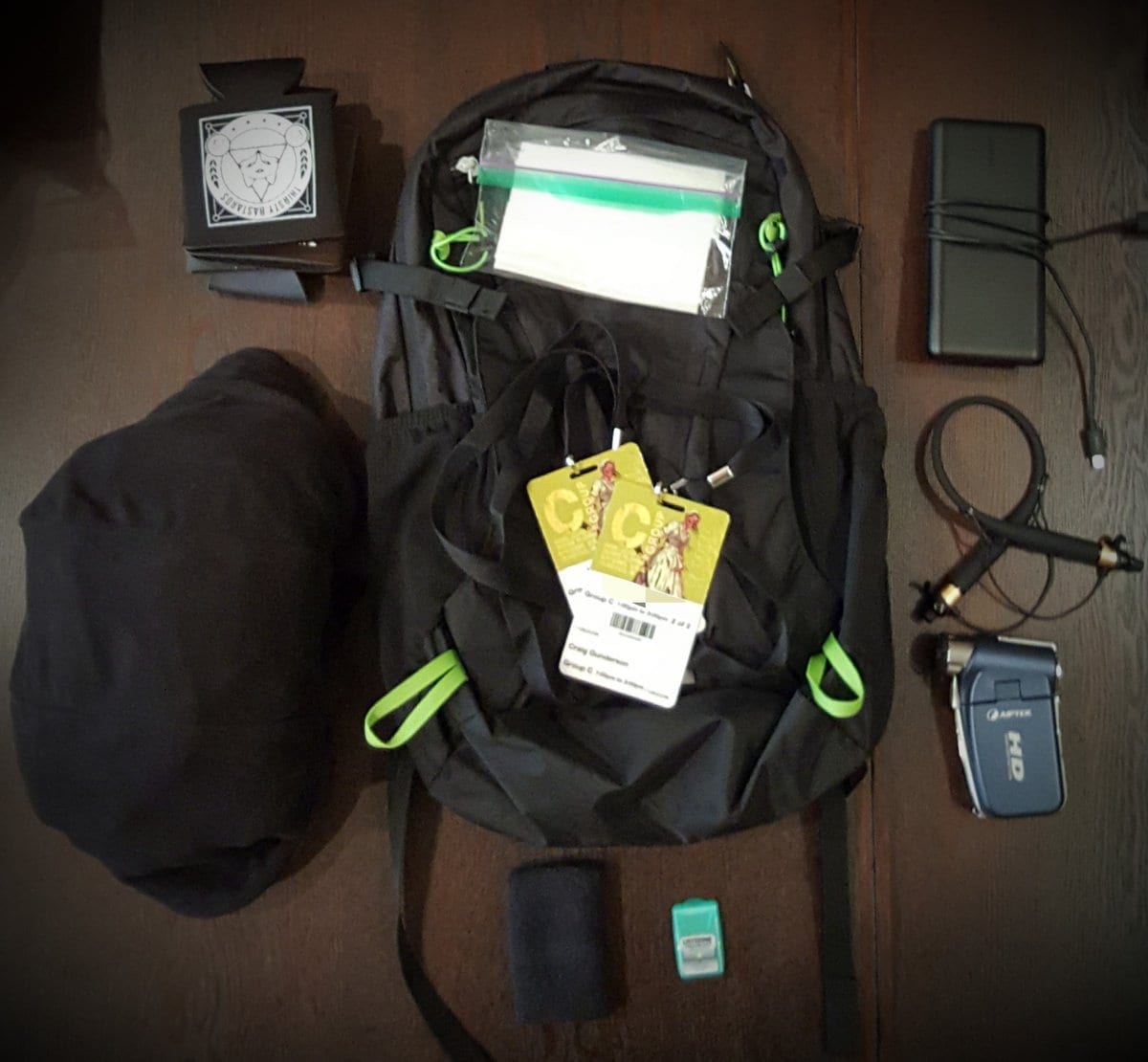 We just found out that our Jimmy is not a ticket holder – he’s got an industry pass to DLD. He is a “Friends of Floyd” ticket holder which entitles him to special tent access at the beerfest. What this does NOT entitle him to, it seems, is a full allotment of beer!

Upon entering the Dark Lord Bottle Pick Up area, everyone with a Distributor Credential will be split off from the general attendees/group sales and be directed to an area where they will be able to PURCHASE an allotment of Dark Lord (2 Bottles this year). Bottles are $20, cash only. Your guests will not be allowed to purchase any BA Dark Lord variants.

So in case you were wondering what kind of privileges industry folks enjoy, know that there are drawbacks as well.

If you thought this would be a quick tip on the use of baking yeast to slow your body’s absorption of alcohol, YOU’RE WRONG!

Ever since Esquire interviewed the Sam Adams founder in early 2015 and he revealed his secret to “drink beer all night long and never get drunk”, the blogosphere has been testing his theory. So have I!

According to NPR, it’s rubbish! And Forbes, although I won’t link to them because of their stupid adblocker solution.

Of the few times that I have tested this technique, I’ve found that drinking water throughout the event makes ALL of the difference. I hit the water coolers or pitchers provided at shows and I’ll definitiely be bringing a water bottle to Dark Lord Day.

One Day Until Dark Lord Day – Getting There

Well, looky here! The forecast for Saturday has really improved! Not super sunny, but we might hit 70 for the first time in quite a while. As a result, the Thirsty Bastards team has decided that kilts will be the agreed-upon attire. That can only have positive results.

Josh and I live in Chicago and Jimmy is coming down from Milwaukee. So how does one get to Dark Lord Day?

Lots of Chicago bars and stores offer shuttles to and from the beer fest. Arguably the best one is from Reggies on south State. Why?

Reggies opens at 6 AM and there is a $10 all-you-can-eat breakfast buffet. Shuttles start heading out at 8 AM, but they are first-come, first serve. Last year we had to wait for a few shuttles before we were able to board the one that could take us.

It’s arrived! We met for brunch, headed to Reggies, got wristbands for the shuttle, had a beer on the rooftop deck, boarded, and we were on our way! Yes, I chickened out on the kilt wearing. I just couldn’t imagine myself being comfortable for 12 hours kilted. Yes, I’ll be doing a Game of Thrones-style shame walk once we get there. 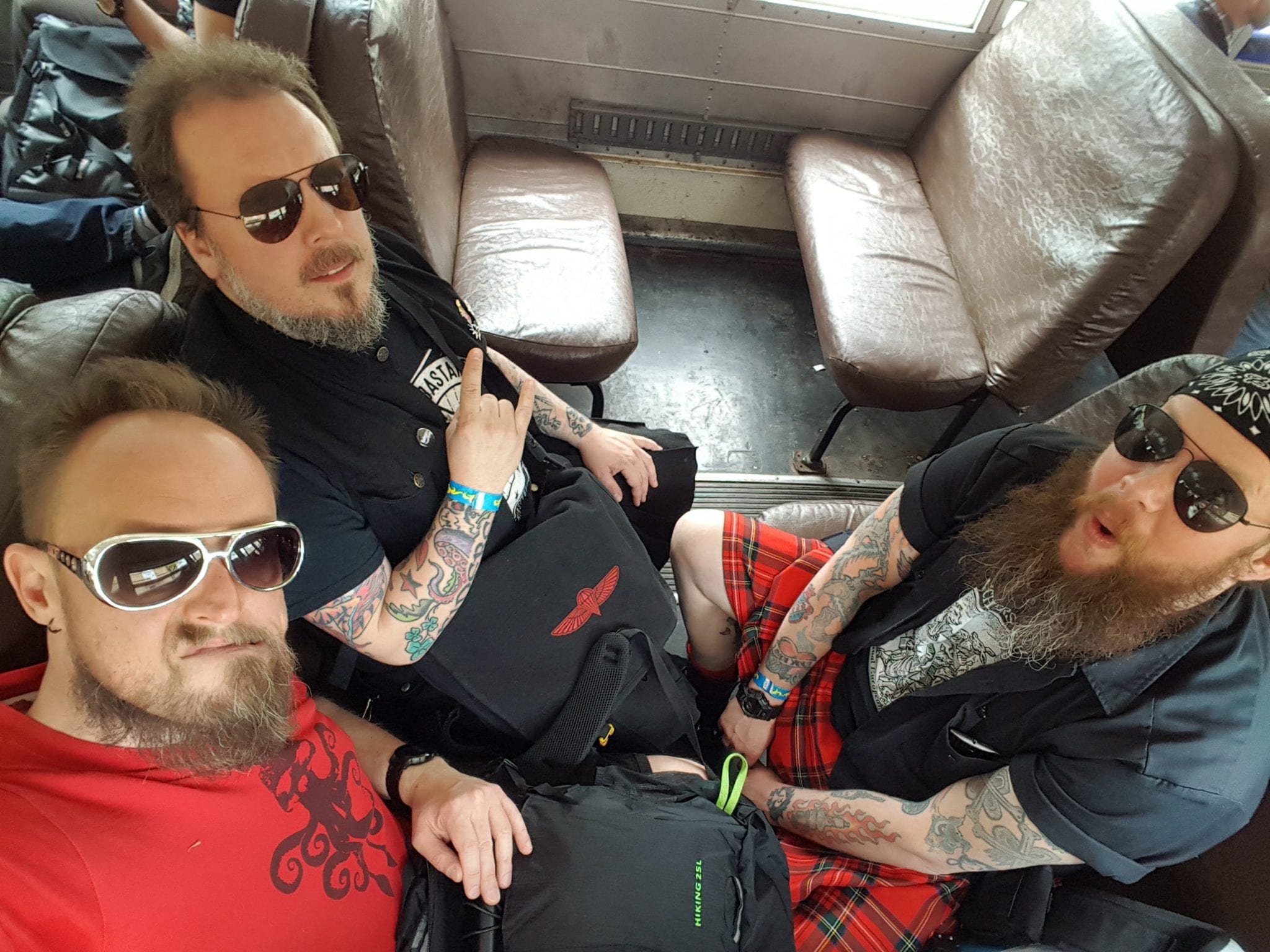 1:40 pm
Arrived on the grounds with no resistance. SO many empty bottles strewn about. TONS of port-o-potties by the entrance. We head straight for the beer allotment line.

2:20 pm
Allotment acquired. Turns out people line up super early for their group. We were behind a ton of Group D peeps. Luckily, a staff person was in charge of finding Group C stragglers and we were escorted past anyone lining up in the group after us. It was kind of bewildering. 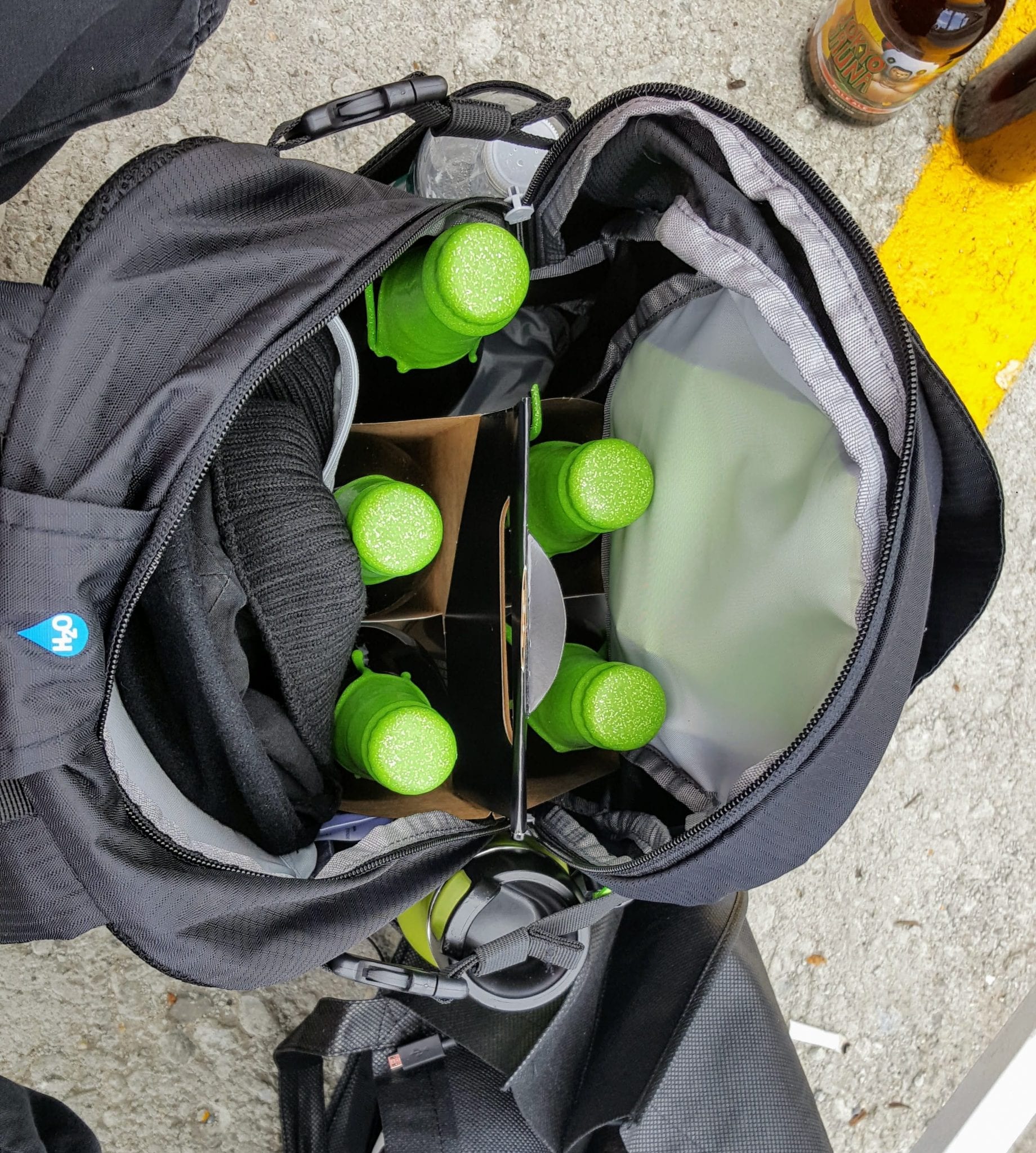 In the excitement, I completely neglected to take a picture of the disbursement of the tote bags. My random bottle is ChemTrailMix (Dark Lord aged in bourbon barrels with cinnamon and pink peppercorns)!

Upon exiting the 3 Floyds building, beer lovers are gathered and offering money and trades for whatever rare variant you might have received. There’s also staff moving you along and encouraging you to clear out from the exit. We found a space to drop our bags and secure our bottles. 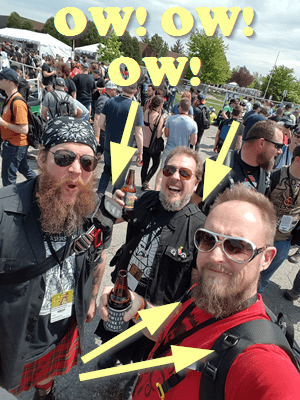 Josh and Jimmy brought messenger bags with them while I opted for the backpack. Josh’s bag was configured so that he couldn’t even switch shoulders and he was HURTING as a result.

Beer is heavy, friends. Get yourself a nice, balanced backpack that will keep the weight symmetrical on your body. I was hurting too, but at least the pain was evenly spread.

A few years ago, there was an announcement by comics writer Brian Azzarello that he’d be working with Nick Floyd on a series of comics based on 3 Floyds beers. Alpha King was the first of them, hitting its third issue as of this writing.

Not only were Brian and Nick signing copies of the comics, but they were joined by artist Simon Bisley as well! No line, no wait! It was awesome!

Our next stop was the very long line for the Dark Matter Coffee tent. We were told that they were selling coffee variants of the Dark Lord. That turned out not to be true.

After waiting about an hour and a half in the Merch line for Dark Matter, we finally made our purchases… Of bottled coffee.

We finally decided that it was time to take in some music at this beer and music festival. Having missed Goatwhore while waiting for our stupid coffee, we watched High on Fire.

We were just informed that Indiana requires a “collapse zone” in front of their outdoor stage performances. Where an appropriately thrashing pit ought to be was a large, open, fenced-off void. Thanks, Pence.

Shuttles were departing from the fest on the hour. It was 7:30 and there was no sign that Amon Amarth, the next and final band, was going to be hitting the stage anytime soon. We decided to catch the 8:00 shuttle back to Reggies.

As we approached the shuttle area, we caught a glimpse of the Reggies shuttle pulling away and exiting the grounds. It was only 7:50!

We were told that one of the three Reggies buses had broken down and the schedule was all out of whack. Given the choice of waiting an hour for the next one, we opted to pay to board a different bus headed to Jaks Tap in the west Loop. So much for a free ride.

More from Josh: Most importantly, be hyper-aware of your landing spot. It’s MUCH better to pass out on the kitchen floor curled up with the dog using the rug as a pillow than to crawl into bed with the wife covered in mud and reeking of liquor. That won’t end well. You’re better off sleeping in the garage.

Here’s my takeaway from Dark Lord Day: There are beer nerds and there are metal nerds. Dark Lord Day is for both. 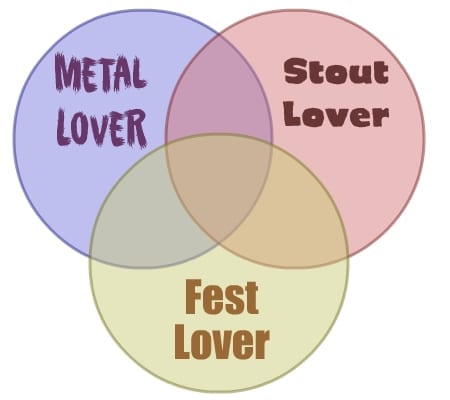 If you love beer and specifically rare stouts, you can simply grab it and go, but the $180 price tag doesn’t really wash. If you enjoy a festival experience, you might get your money’s worth. If you love metal as much as the Floyds founders do, I’m sure you will not be disappointed. If you’re simply a Floyds fan, you’ll be in heaven. And if you are a member of a national posse of rare beer aficionados, meeting them at Dark Lord Day might be the best way to interface with them.

But if you fall into just one of these categories, you’re going to feel short-changed if you pay full price to attend. There’s not enough to keep you engaged unless you live where the Venn diagram overlaps.

Personally, I have discovered I am just a stout lover. I don’t think I’ll be back.

But then again, I said that before!

The Definitive Thirsty Bastards Guide to Getting Started Homebrewing Storm Funeral Ambrosia – The Best Beer Labels of May, 2017