Adam Forman and the beer labels of Jolly Pumpkin

Sometimes when doing research about a beer label it’s really tough to find out the name of an artist. Sometimes it’s as easy as reading the fine print on the label. But when it’s difficult, I’m always surprised. You expect there to be a relationship between a brewery and the person who creates the label image. When you do find that such a relationship exists, it always makes for a good story.

This is how Adam Forman became the artist for the labels of Jolly Pumpkin Artisan Ales in Dexter, MI. 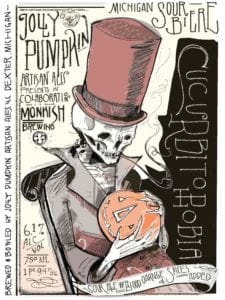 “I was a long time tattoo artist in the Ann Arbor area where Ron [Jeffries] was making beer for a local brew pub. I had been tattooing Ron for quite some time when he embarked on The Jolly Pumpkin expedition and he asked me to do a few labels. I had no idea what I was getting into at that time… Its a great chronology of the brands development along with my illustration skills.”

To describe the Jolly Pumpkin theme is a bit difficult. They create unfiltered and unpasteurized beers in the Farmhouse tradition. They also seem to have a pirate/nautical theme. Their beers have a Spanish names further pushing the piratey envelope. For a long time, the running joke was that they don’t actually make a pumpkin beer. Until they did. So “old school”, pirates and Spaniards, no actual pumpkin beer… I imagine all of this adds up to quite a challenge when tasked with illustrating their labels.

“I love illustrating for JP because it has evolved into such a unique brand and I feel like I am contributing to a complicated and delicious beer ecosystem.” 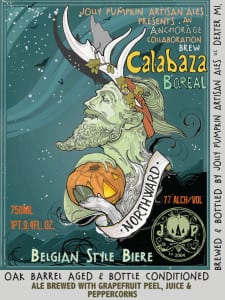 My favorite label Adam has illustrated is Calabaza Boreal – the large squash of the North! “The name Calabaza Boreal that Ron Jeffries came up with was certainly enough to inspire an image in my head. The idea of Jolly Pumpkin traveling northward to the Alaskan frontier where it could be transformed somehow, perhaps to a more primeval antlered form, lit my imagination on fire. I could see this man creature trudging through the snow and all along carrying with it a precious gift for the Borealis gods; the mystical gourd, the very heart of The Jolly Pumpkin.” 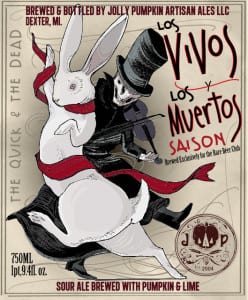 Another favorite of mine as well as Adam’s is Los Vivos Y Los Muertos Saison featuring a white rabbit dancing with a top hat-wearing skeleton fiddler. By the way, it has pumpkin in it.

“I really feel it is provocative and energetic and captured a certain romance… kind of a timeless symbolism that evades the viewer just enough to inspire chase. The lettering was mostly hand written which I prefer and it seemed to tastefully avoid the over designed look that labels often fall into. Honestly, Ron Jeffries puts so much creativity and passion into his beers and it’s really hard to keep up with his talent and do his vision justice. I would hate to kill it and put a tombstone of a label on something he created with such inspiration. Please, anything but boring!”

As for the creative process, Adam has a clear strategy. “I am constantly making art of some kind or another but the notion of what art is has been ever evolving for me. I do my best to surround myself with the most creative and boundless people I can and then try to live up to their examples. It’s a lot less about product for me these days and more about using the art mind in new ways.”

For more about what makes Adam and his art tick, I highly recommend you check out his blog. Nearly every entry has a note about the imagery he uses in his tattoos, sketches, and beer labels. Knowing that some characters are reoccurring and even have names and stories which just adds to the richness of Adam’s charming illustrations.