Jeff Kuhnie and the labels of Pipeworks Brewing

We are extremely lucky to have some really ambitious craft brewing companies here in Chicago. Chief amoung them is Pipeworks Brewing. Step into any beer retailer in the city and you will be assaulted with a range of Pipeworks beers that no one outside of the state of Illinois has heard of. You will also be assaulted in the eyeballs (in the best way possible) by the work of Jeff Kuhnie.

While walking his dog one day, Jeff noticed a couple of guys poking around the empty building next door. He asked if they were doing something with the building, “…and they explained they were thinking of opening a brewery here.  I put out my hand to shake theirs and said, ‘Hello, I live next door.  I am an artist and would love to do a label for you.’  Simple as that.  After a few years, and almost a dozen labels so far, I am honored to call them friends.” Those friends are Pipeworks Brewing founders Beejay Olson and Gerrit Lewis.

There’s a lot to love about Pipeworks Brewing. They brew some of my favorite local beers, and they credit the illustrator on each label. I don’t see this kind of commitment to the artist nearly often enough and Pipeworks deserves HUGE kudos for this practice. 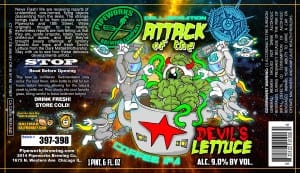 Jeff’s favorite label he has done for Pipeworks Brewing is Attack of the Devil’s Lettuce – a collaboration between Pipeworks, Dark Matter Coffee and 18th Street Brewing. “I got to do a crazy battle between the two breweries as astronauts, and dark matter as a space ship monster made of devil lettuce. The label turned out really well, I think, artistically as well as showing all three companies represented well. The beer was damn tasty as well, so that was a huge bonus.”

“But my real favorite labels I have done are the few they have said “no” to. I have a couple I’ve done that I love and think are bad ass, but for some reason or another, they said no. It happens.”

Motivated to be creative by his parents while living in Rochester, MI, Jeff came to Chicago to attend Columbia University. “I have always been creative, drawing and making things ever since I was old enough to take an art class. I am grateful for parents who helped nurture my creativeness ever since I showed signed of wanting to make art.”

Jeff fine art pursuits include larger pencil works on ragboard which can be seen on his website. “The best way to describe that work would be portraits of people wearing animal hats. I hope to have a showcase soon where I can show off more work in this style.” He was able to bring this art series to the Froggy Style Pipeworks label.

As I’ve written before, my favorite label by Jeff is Reaper Vs. Unicorn. I’m also a big fan of the playing card-style images he has created for Seven, Paradisiac, and Foolish Wit. These labels are variations on face cards (most frequently, The Joker) with reversible, mirrored figures. Pipeworks Brewing has done a series of “Vs. Unicorn” beers and each one tells the story of an epic battle. Jeff’s contributions to that series are among the highlights.

“Anyone can find more of my artwork at my website, Half Man, Half Monkey. I have some great examples of previous work I have done as well as examples of other styles I create in. Some things a few have seen, but most people haven’t. I have a few items for sale on my site, but if anyone is looking to hire me for their own needs, this is the place to contact me. I am always looking for work, especially creative work.”