In case you missed it, AB InBev has made brewing into the next “Space Race”. On 15 December 2017, Budweiser sent 200 barley seeds on a SpaceX rocket to the International Space Station. Bud would like to know if the seeds suffer any untoward consequences from being in orbit.

We find this pairing funnier than cotton candy and a smoked gruit. After all, isn’t SpaceX the antithesis of everything we’ve come to understand about putting objects into space? Why on Earth would the underdog of space exploration be teaming up with the “NASA of beer”?

In the spirit of exploration and discovery, we thought it would be appropriate to paint the backs of your eye-holes with the best beer labels featuring astronauts and other non-human, suit-clad space explorers… From craft breweries not owned by AB InBev, of course.

The following labels were registered with the Alcohol and Tobacco Tax and Trade Bureau. They have been selected for their aesthetic appeal and cuz dey got astronauts. 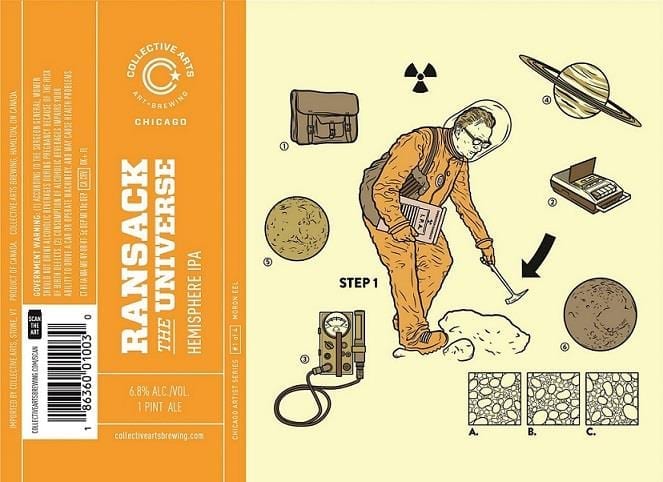 Josh:
*click*
Roger’s log, Day 4: I am beginning to suspect that the web-conference I attended on space prospecting over-sold the level of adventure and downplayed the tedium of such an endeavor.

“Explore new worlds in your free time!”, they said.

What they didn’t say is that most of the time I’m dicking around trying to get the damned Geiger-counter to work, or hauling around radioactive samples in what I suspect is an unshielded containment bag. I have a rash under my right arm that won’t go away and this rock hammer is less than optimal for serious excavation. Oh, and if my stupid effing glasses fall off and get stuck in my helmet one more time…

Every time I look down (looking down is pretty much all I do), they fall off. I can never seem to flip them back up and end up having to walk all the way back to the space wagon to readjust.

Anyway, I’m not going to give Sally the satisfaction of turning around and heading back so she can lord this over me like that Tribble farming thing a few years back. Hey! I think that’s a power cryst…ah Crap, my glasses! 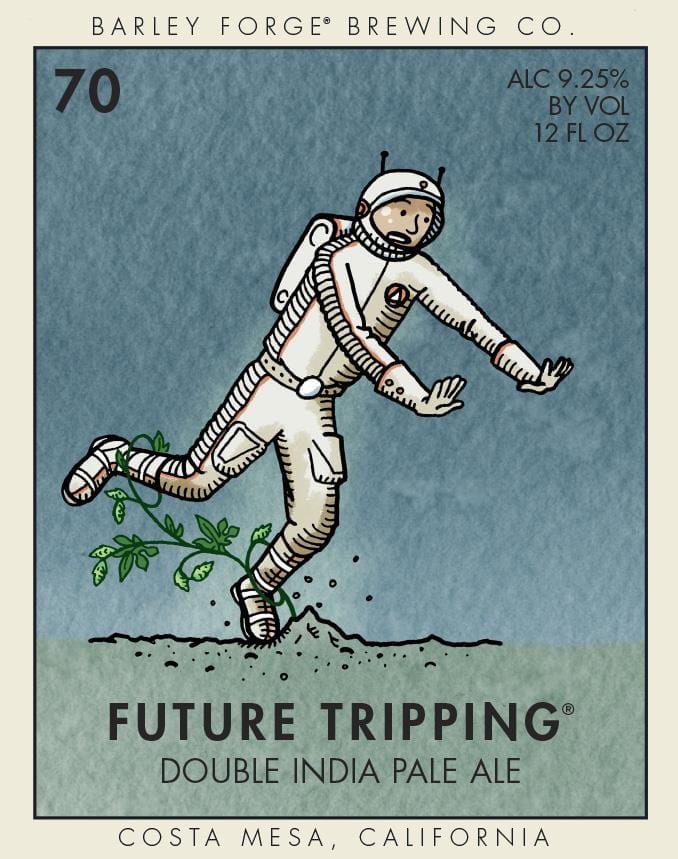 Craig: There’s something hilarious to be said for traveling hundreds of thousands of miles to another world, taking all of the precautions involved, the eyes of the world focused on your every move, and then physically stumbling over the local flora.

It’s bound to happen someday. It WILL happen. What if it already has? What if Buzz Aldrin got all cocky on his Moonwalk and tripped over a stray rock? That footage exists somewhere and might be just a “Freedom of Information Act” request away! 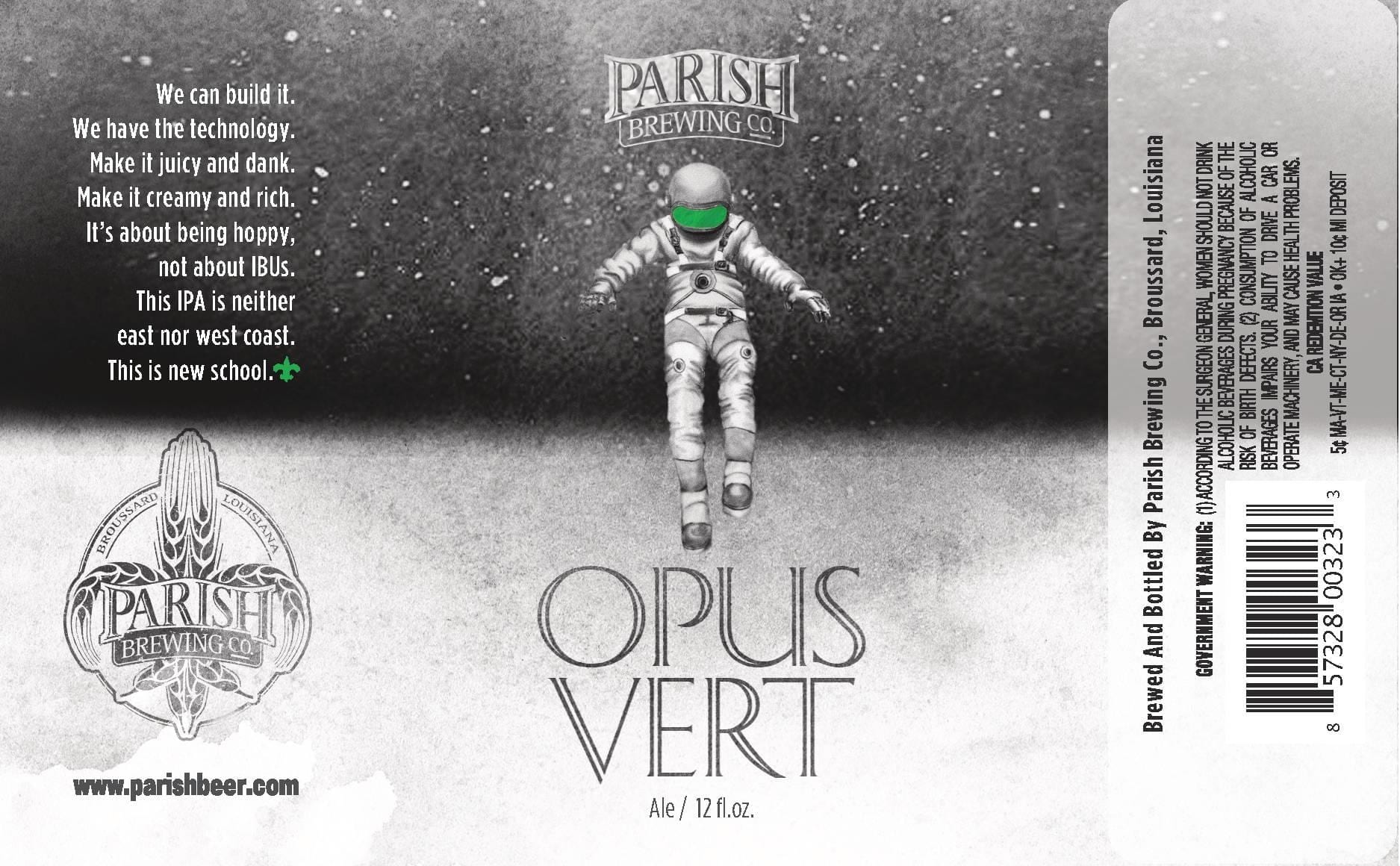 Josh: Great use of color on this one. I really like the way the spot color offsets the sparse but striking background. Although, my first thought upon noticing the green visor was “space sneeze” rather than “a new frontier in hoppiness”. 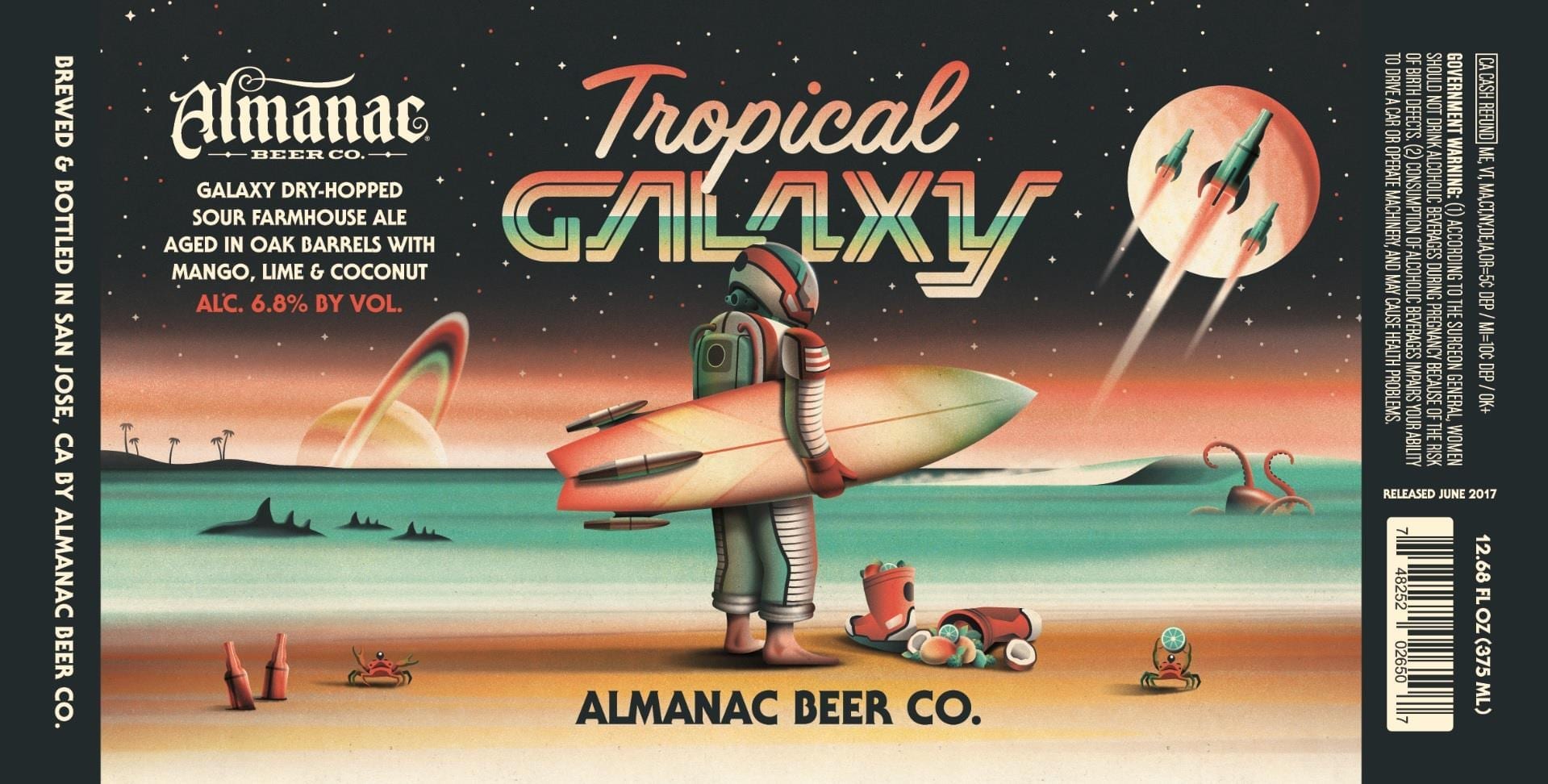 Craig: I love this label for its visual subtlety, its subdued palette, and its easy storytelling.

You’ve got otherworldy creatures injected into what would be an otherwise mundane surf scene. You’ve got an interstellar traveler who really just wants to hang ten on the most placid body of liquid (I daren’t say water) he’s seen. You’ve got the beer ingredients transported in what seems to be his boots. In case you missed it, those other rockets in the background suggest that he has been left behind, or he’s simply content to wait for that “perfect wave”. It’s all delivered in delightful red and green hues that make me believe this world exists.

Co-Founder/CEO Damian Fagan gave me the low-down on this label’s creation.

“The beer was named Tropical Galaxy because it was brewed using mangoes, coconut and lime, and it was also dry hopped with Galaxy hops, so the name was perfect. The art concept seemed immediately apparent to me . . . of course it had to be an intergalactic surfer standing on the beach of some far-away planet, getting ready to paddle out into the mysterious ocean before her. We had a lot of fun with it. We even made a poster for it on holographic paper.

“The brilliant artists over at DKNG Studios (Beverlywood, CA), Dan Khulken and Nathan Goldman, brought the concept to life in a way that, as always, defied our expectations. We work with Nathan and Dan on many design projects, and their talents seem to know no bounds. We are fortunate to count them both as friends and colleagues in great design.” 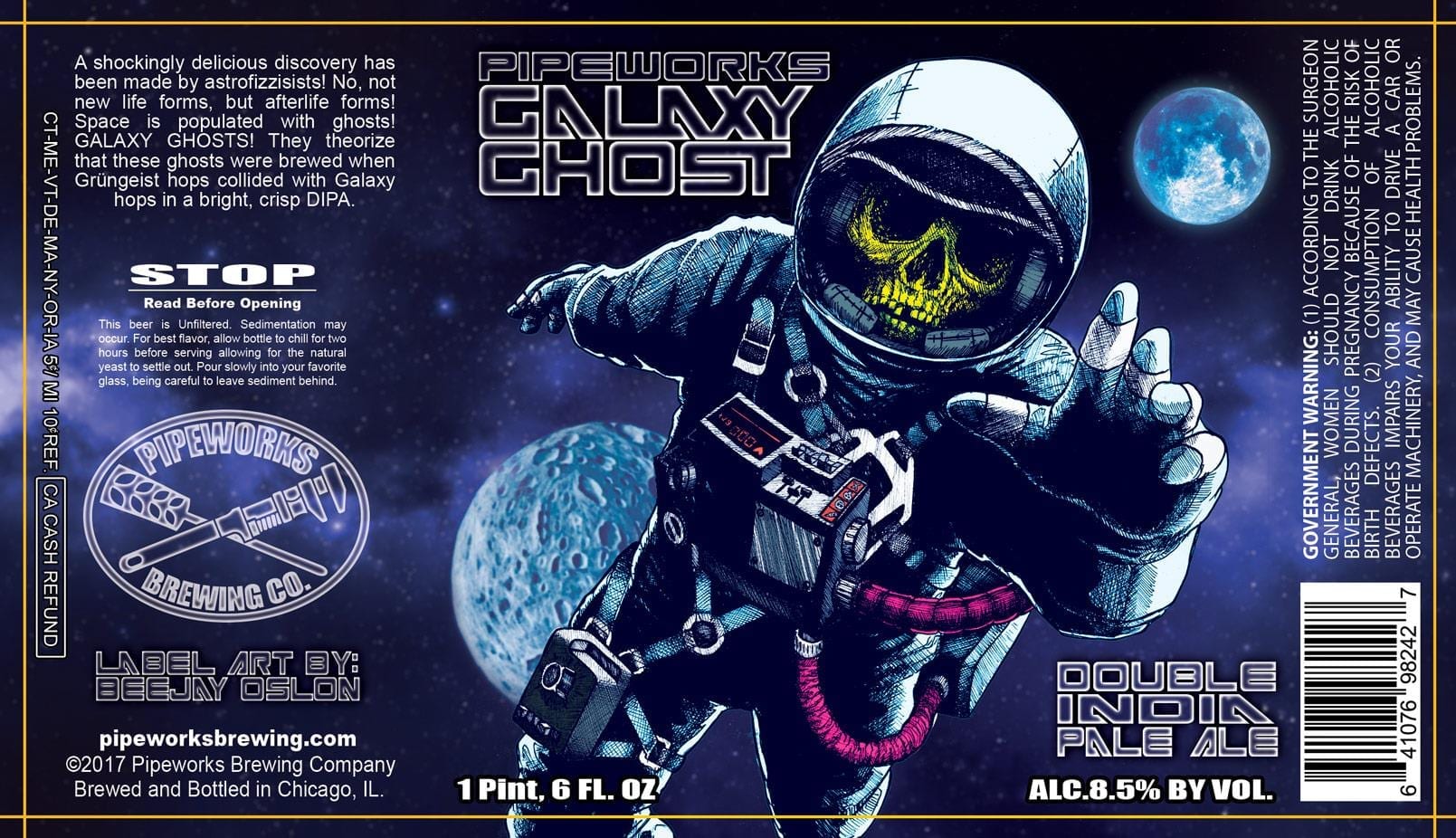 Josh: Here’s another Pipeworks label. All the can artwork is done by Jason (see above), but the bottle (large format) labels are done by various artists and don’t stick to a unified theme, so you get all sorts of different kinds of artwork for those. This one’s by Pipeworks co-founder Beejay Olson, and it’s pretty fucking rad. I desperately want to airbrush this onto the side of a 1967 Dodge Fargo Van, either this or the mural from the end credits of Spectreman… Uh, I’m gonna need two vans. 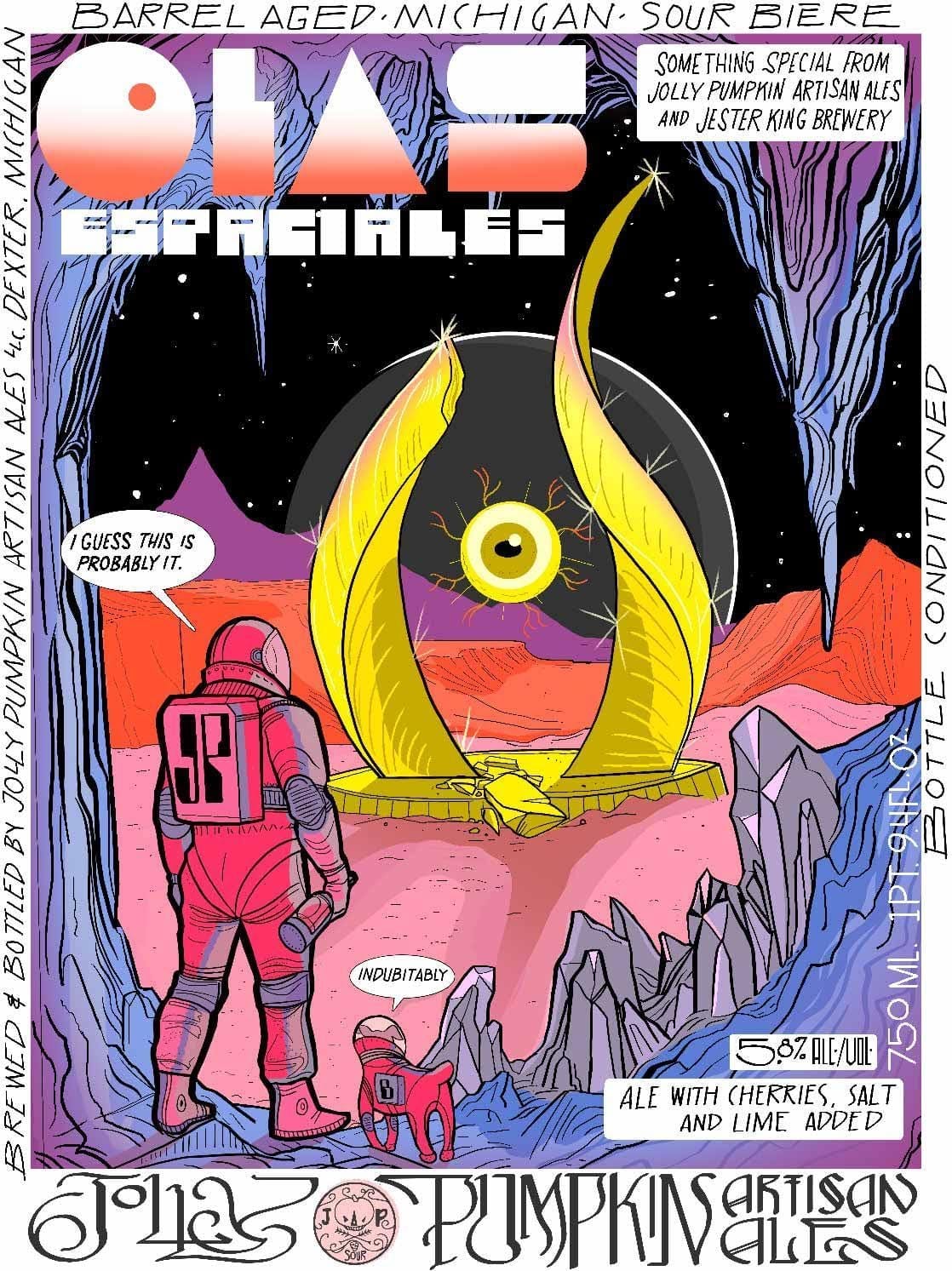 Craig: Oh, I’m sorry… Did you think you were going to read a post about the best beer labels in ANY CATEGORY and NOT see a Jolly Pumpkin label by Adam Forman? Clearly, you haven’t bee reading for very long.

I reached out to Jolly Pumpkin owner Ron Jeffries on this particular label. Here’s what he had to say: 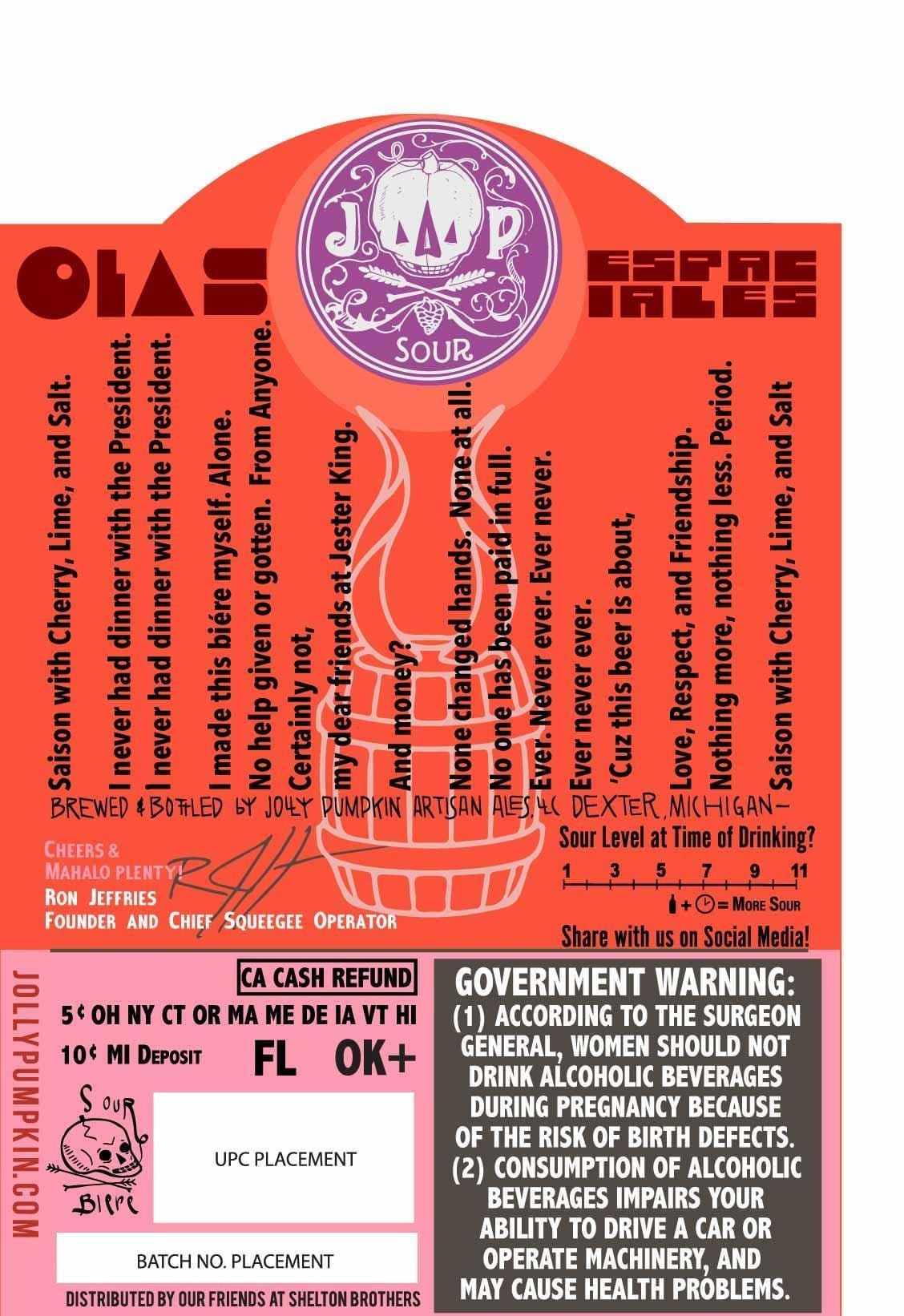 “My input on labels vary from label to label. Sometimes I have a vision, others Adam runs with the name and theme of the beer. Most are a combination of the two. I do write all the rear labels and name all the beers, though.

“For this one, Jester King came out with their version first, and sort of set the theme. We just rolled with that and played on the old school comic book space theme.

“The words for the rear were inspired by the Ice Cube and other rap artists we listened to when brewing the beer, and the State of TX not allowing us to actually let folks know this was a collaboration beer with Jester King.” 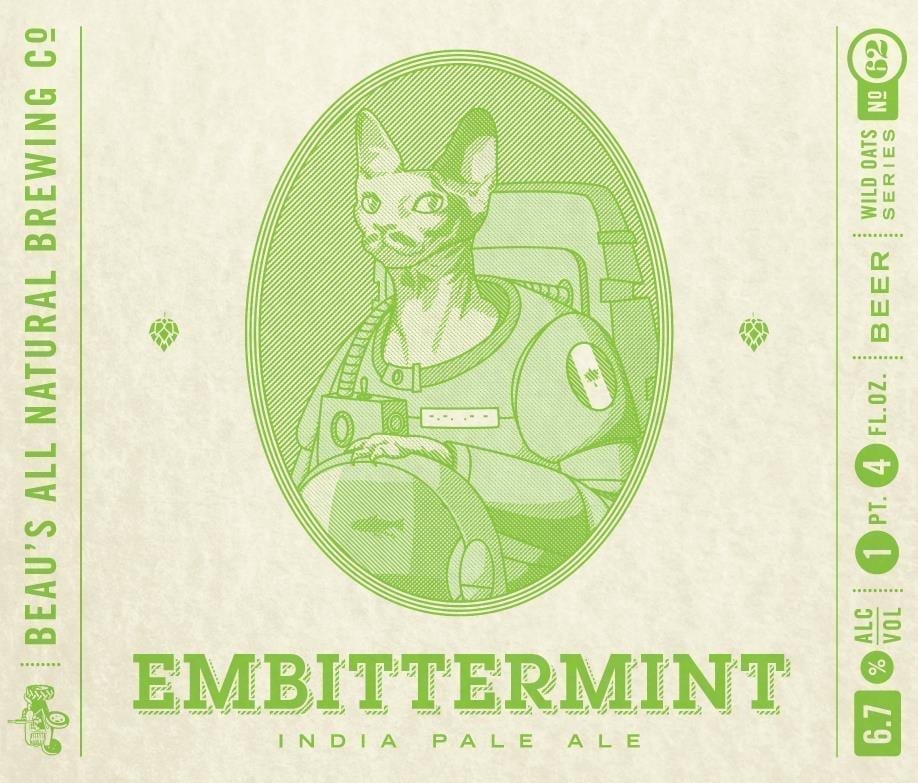 Hot insider info: According to the designer, the cat is named “Catfeld” named after Canadian astronaut Chris Hadfield (totally worth the click for a comparison), which is neat. 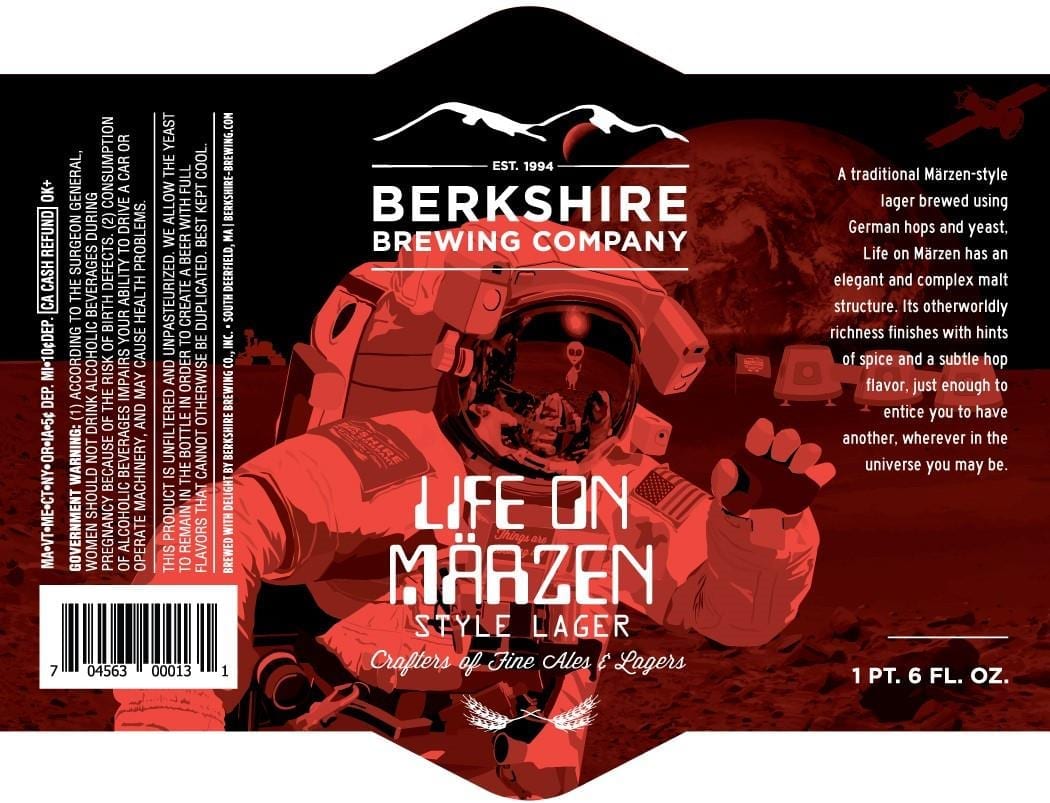 Craig: I love the play on the word “Märzen” and the red palette to suggest the “next planet over”. Hopefully, that astronaut will be inviting his new friend in for a cold beer. 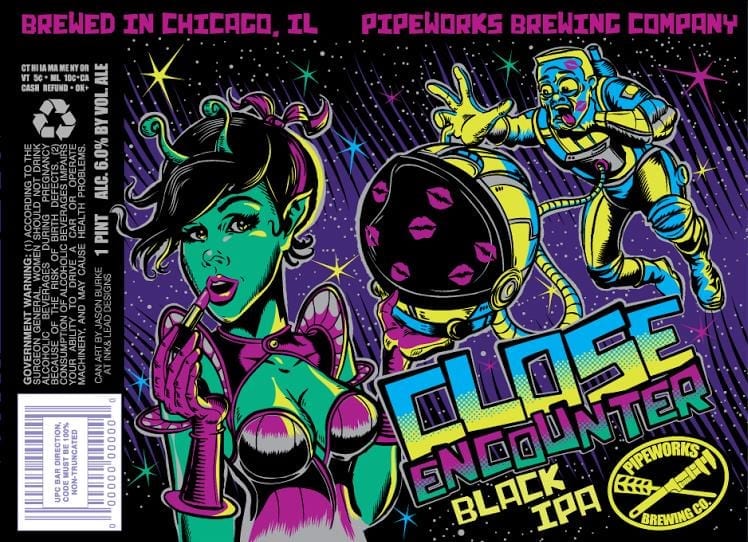 Josh: As always, Pipeworks can artist, Jason Burke, does a bang-up job; this time with a sly nod to poster artist Coop. We have this beer on the line at the bar, and every time I walk past it, it elicits a giggle. It stands as a perpetual reminder that sometimes you love something so much that it consumes your being, and no matter how hard you try, the obsession invariably ends in disaster, disappointment, and a litany of court orders – Like that thing with me and the 1998 Nagano Olympics Japanese women’s curling team. 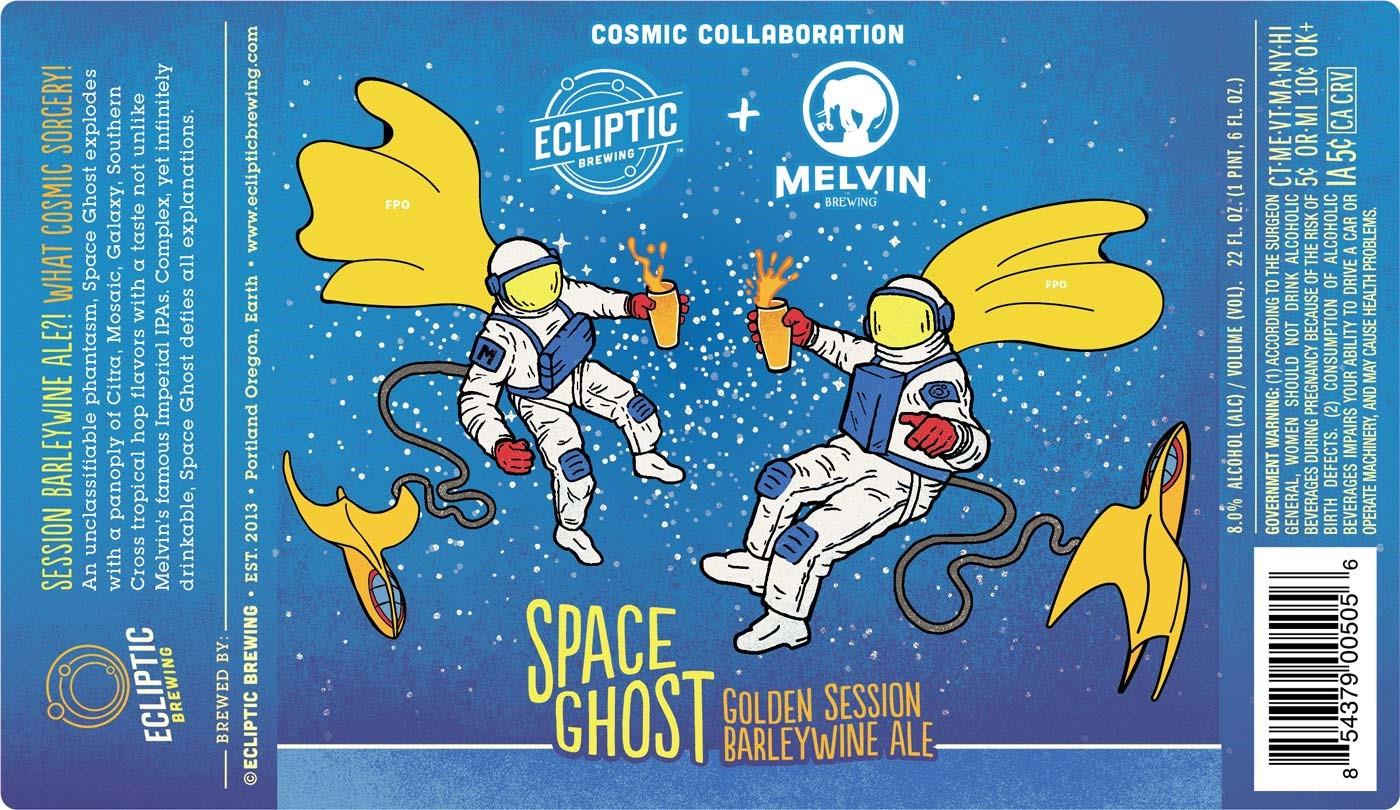 Craig: Can we stop pretending that you can drink liquid in space? These guys don’t even have straws.

Here’s what Karolyn Simon from Ecliptic had to say about this label from designer Sean Haggerty:

“Ecliptic + Melvin Space Ghost Golden Session Barleywine is part of our Cosmic Collaboration Series and the label was definitely a favorite among our fans. The astronauts toasting acts as a reminder of the friendships and celebration that is involved when making these collaboration brews.”

Sean himself, from Sasquatch Agency, added, “The Space Ghost release was one of an ongoing Ecliptic collaboration series featuring those same astronauts. We keep that theme fairly constant though we have fun switching up the background & colors for each new release (see attached for the last few). I’ve had the privilege of being the lead creative for the Ecliptic brand since its inception, starting with the brewery branding. It’s been a blast.” 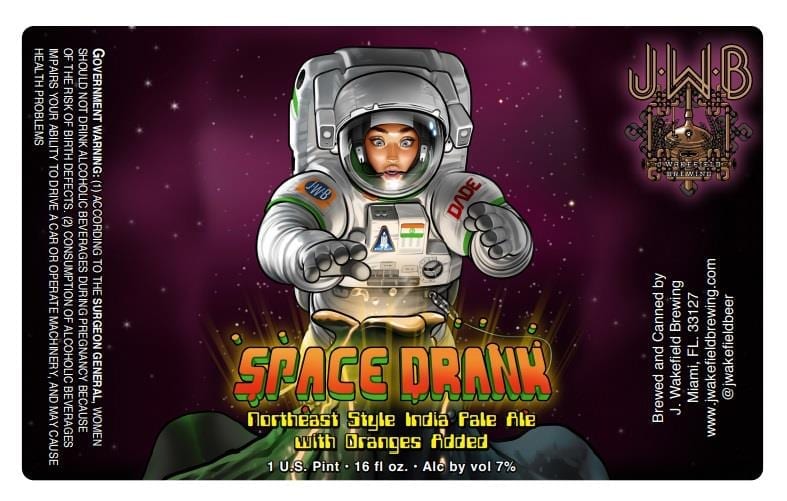 Josh: I feel bad for whoever took the time to do a nicely detailed digital painting with a couple of cool little details and a sardonic twist only have someone slap text right over the point of focus.

Designer: “Okay guys, we got the astronaut… yeah, she’s a pretty girl like you wanted… and she’s looking over, get this, a glowing ‘Alien’ egg full of beer. I know she’s looking right there, but I don’t think we should put the beer name right there. Well, that kinda kills the joke. There’s plenty room on either side, or we can resize… I think people CAN read sideways, actually. Really?!?! Fine. Right in the middle, it is. Done. Happy? Yeah, I can make the logo bigger… –under breath: fucking idiot–” 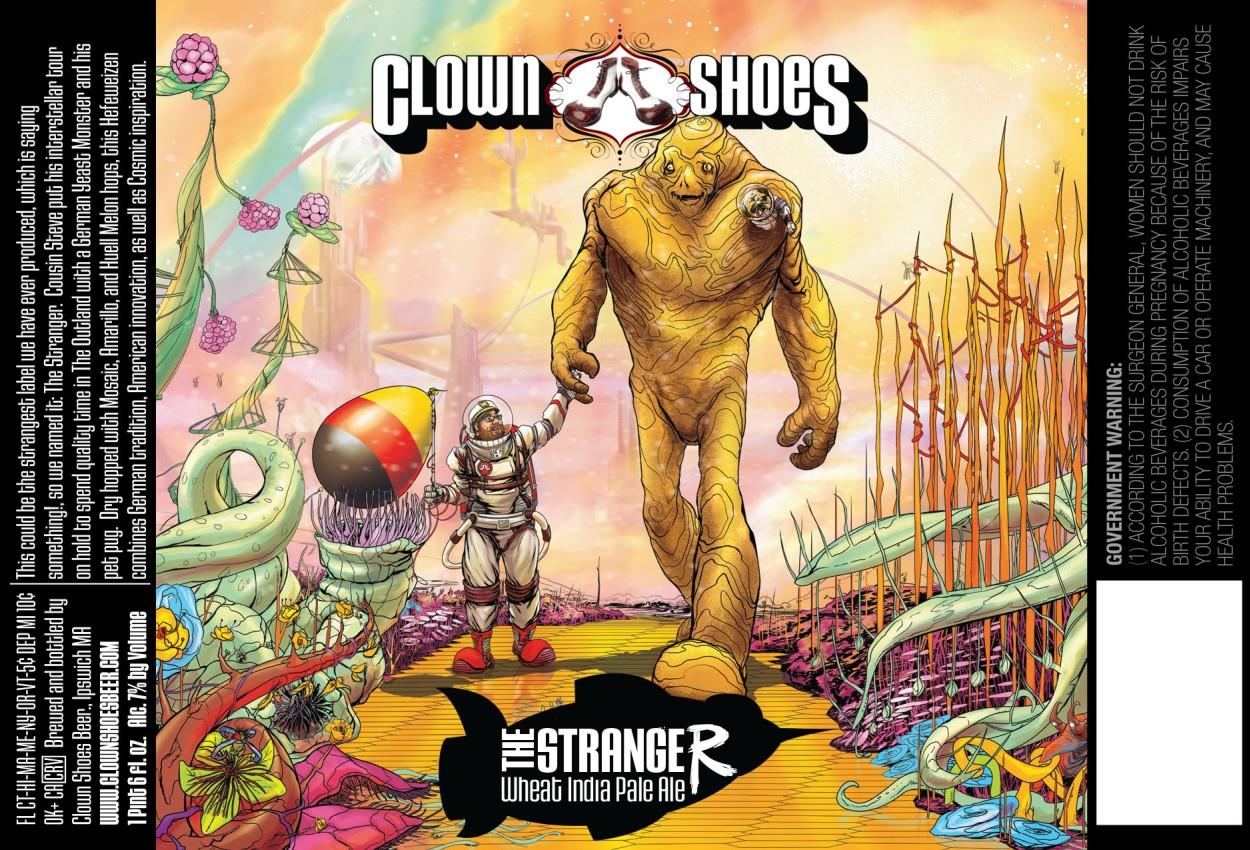 Craig: Oh, I’m sorry… Did you think you were going to read a post about the best beer labels in ANY CATEGORY and NOT see a Clown Shoes label by Michael Axt? Clearly, you haven’t bee reading for very long.

That said, WHAT’S GOING ON HERE?!? Even Clown Shoes admits, “This may be the strangest label we have ever produced.” There’s a pug astronaut embedded in the shoulder of the “German Yeast Monster”. WTF?

Clown Shoes co-owner Gregg Berman had this to say:

“The Stranger is indeed a fun and interesting label. It features our Texas rep, Steven Von Grimm, walking hand-in-hand with a giant yeast monster and his pug. It is an Americanized Hefeweizen, which is a strange style to begin with, so we wanted to convey that through the label art. The German flag balloon is meant to show the Hef’s origins in German beer.”

Craig: I wrote about this label by Quebec illustrator Fred Jourdain way back in late 2014, but this space monkey fits right in with the rest of these astronauts.

“My idea behind the Albert III label was to pay a tribute to the infamous Albert monkeys that were sent to space to test the first shuttles! The monkeys did not make it back and I always loved the idea that they might have landed somewhere in the galaxy, on a planet full of cosmic amazons who like have fun, dance and have a good beer. Who knows how lucky would Albert be if all of it is true!

“It was the 5th label design I did for Le Trou Du Diable and by now I have completed a series of 15 different designs. It was and still is a lot of fun to work on that kind of projects, even more as I have a lot of freedom to suggest ideas and concept which are fun to illustrate and are really well received by the owners and the public as well!” 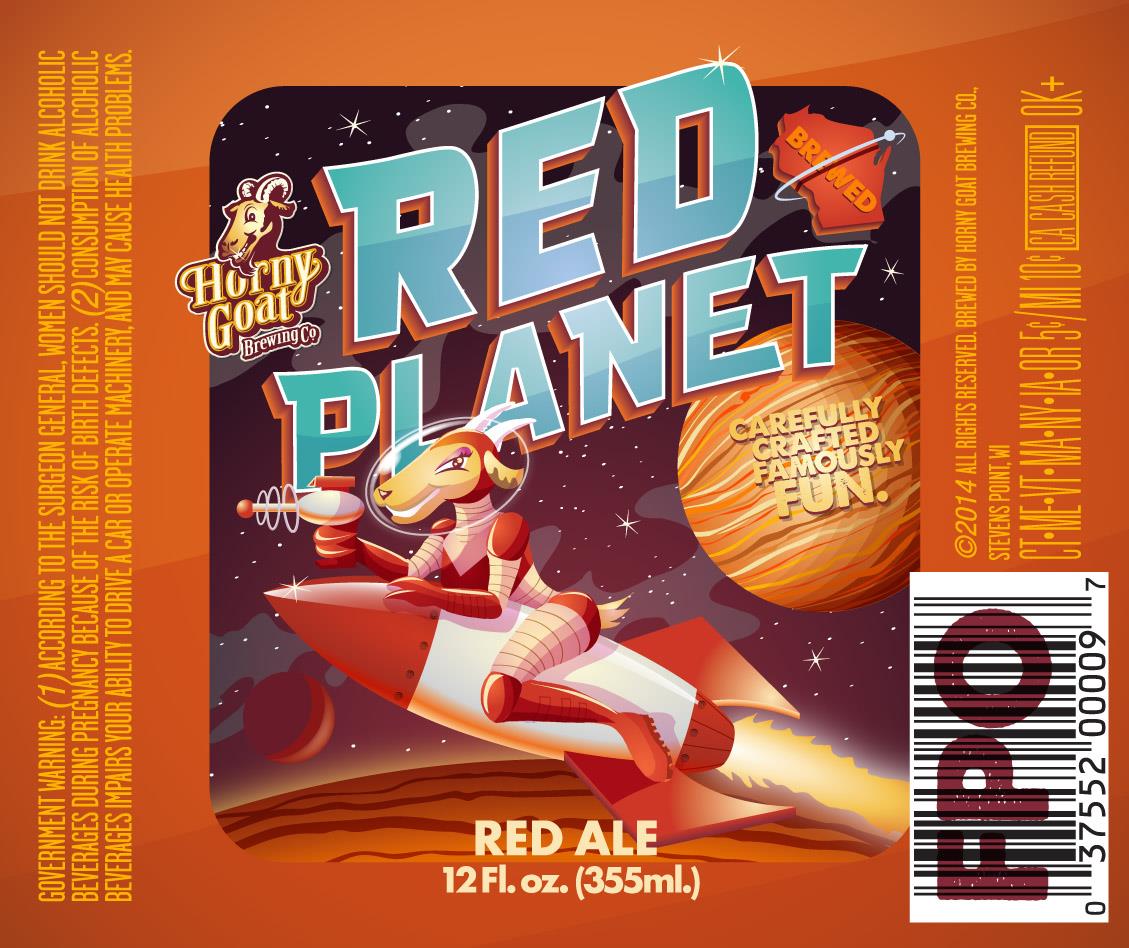 Craig: I said there’d be “non-human, suit-clad space explorers” in this post, but I doubt you thought you’d see a goat. This one is steeped in sci-fi glory from the ray gun to the lettering. 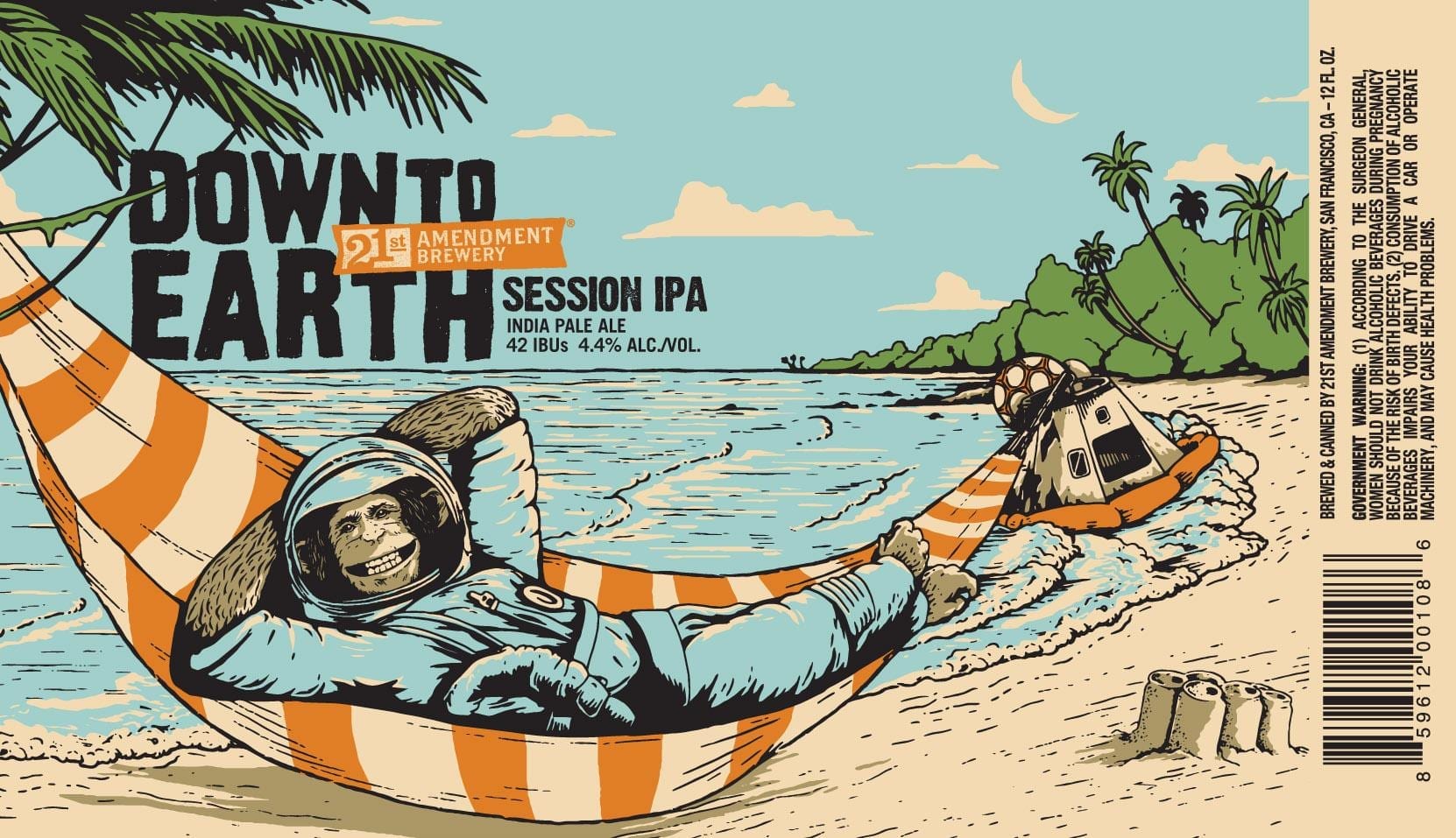 Craig: Here’s another space monkey that I’ve written about in the past. I love that it tells a story and that it’s a story with monkey astronauts, but you knew that already.

You can check out more fine illustration from Joe Wilson on his website.

Jason Burke and the Beer Labels of Pipeworks Brewing The Gutsy Growler: All of Your “Beer To Go” Questions Answered